skip to main | skip to sidebar

Congratulations to Tyler and Haven. It's been a long time coming.

Now...I'm off to figure out how to order some new team gear in support.

Just a tiny cycling tidbit for today. Thanks for stopping by.
Posted by Donna Tocci at 8:54 AM 2 comments:

Here's hoping that you all have some good things to be thankful for today, no matter where you live. And to my friends here in the U.S. "Happy Thanksgiving"!

Thanks for stopping by.
Posted by Donna Tocci at 10:12 AM 3 comments: 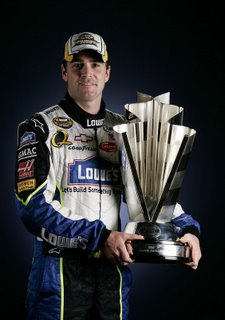 Photo by Robert Laberge/Getty Images
The NASCAR season is over for 2006. Hendrick Motorsports driver Jimmie Johnson was the most consistent driver of the year and takes home the Cup. Congratulations to Jimmie, Chad Knaus and the whole Hendrick Motorsports organization, including his car co-owner Jeff Gordon, who just so happens to have 4 championships himself! Jimmie is going to be a great champion!
Just a tiny tidbit. Thanks for stopping by.
Posted by Donna Tocci at 7:33 AM 3 comments:

Cyclingnews reported this morning that, in Nevada this weekend, Tyler said that he'd signed a contract, but didn't name a team. It is now being reported that the owner of the Tinkoff Credit Systems team is saying that Tyler is part of their new team. No official announcement has come out, but Tyler posted to his website today after a long absence. He details his relay team's Ironman adventure over the weekend (he kicked butt on the bike) and ends with, "As for everything else in my life, stay tuned... "

Sounds like an official announcement can't be far off. I see some Tinkoff team gear in my future....

In other team news, it seems as if Ivan Basso is with Discovery now and looks good in their gear. Congrats to him.

Just a little cycling tidbit for today. Thanks for stopping by.
Posted by Donna Tocci at 8:55 PM 4 comments:

Yesterday (Sunday), I thought all day, "I need to blog". However, yesterday turned into an old-fashioned rainy Sunday. Some reading - I'm on a Stephen White kick these days - and some watching NASCAR. Perfect for a dreary Sunday in November. So, no blogging, but it was a relaxing day before the start of a hectic week. Blogging will resume this week for sure.

What did you do with your Sunday? I hope it was equally as nice. Happy Monday, y'all!

Just a quick, little tidbit for today. Thanks for stopping by.
Posted by Donna Tocci at 7:26 AM 3 comments:

The voters of Massachusetts made history yesterday when they elected Deval Patrick as the new governor. He is the first African American governor of the state and only the second ever elected in the country. Congratulations!

What an interesting night for the country. Some huge changes coming.

Just a morning tidbit. Thanks for stopping by.
Posted by Donna Tocci at 8:19 AM 3 comments:

The polls are open here in New England. No matter who you are voting for today, just get out and vote! Don't assume that your favorite candidate is a shoe-in. Go. Make the effort. Have a voice. Vote.

I'm off to vote right now. Thanks for stopping by.
Posted by Donna Tocci at 7:16 AM No comments:

Tyler Hamilton has changed the colors of his website from Phonak green. Seems to be more generic....then again, I haven't seen a color scheme for the new Tinkoff team that he's been rumored to be talking with now. That is an interesting situation that I'm watching closely.

Speaking of Tyler, his foundation announced the route for MS Global next year. What is MS Global? It's 8 days on the bike in Europe having a challenging, yet great time, all while raising money for Multiple Sclerosis programs. Here is what the THF has to say about the funds raised by this bike event:

A portion of the proceeds goes to fund the Jacqueline du Pre Research Fellowship & Grant through the MSIF. Increase public awareness of MS ,MSIF and THF. Promoting the health and personal empowerment of individuals with MS through cycling.

This year the riders will be tackling the might Dolomites! This is just an 'all good' event! If you are interested in joining this group of riders, check out the information on the website.

Austin, Texas is getting its own pro race in June, 2007. Read about the 2007 Austin Invitational here. C'mon, does this surprise anyone? Austin....the home of some racer-or-other that you might know about....what's his name anyway?

The big news for the cycling trade this week is that Eurobike, the largest bicycle tradeshow in Europe, has decided to have a go of it here in the U.S. They will compete with the only bicycle tradeshow in the country, Interbike. What do I think about this interesting bit of news? I've written all about it over the the Krew's site. Check it out.

What is a cycling tidbit section without Lance ? He's still not gone from the public eye. He's in New York to run the New York City Marathon tomorrow (November 5) and looking complete the course in 3-hours. He's been taking some running advice from the mother of his kids, too. Since she did well in her NYC Marathon debut, that might be a smart idea.

Just a few little tidbits for this Fall Saturday in New England. Thanks for stopping by.

Posted by Donna Tocci at 2:16 PM No comments:

Donna Tocci
When I write on my blog or contribute to the Krew's blog, Perewitz Plog or The Spokesmen Podcast they are my very own opinions and thoughts. They do not necessarily reflect the opinion of any company I currently work for or with.